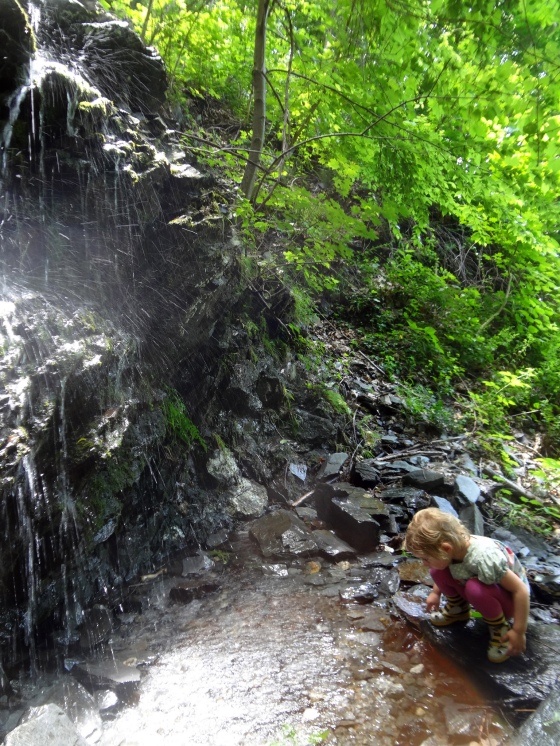 This is a strange time to be raising a daughter. For a million reasons, but in this post I’m gonna stick to those relevant to the four-and-under set, as that is the only kind of daughter I have experience with so far. When I first began to have ideas about raising a daughter (years before I had one, which is the best time to be an expert on parenting, doncha know) I was so overwhelmed by the vast swaths of pink presents at a friend’s baby shower for her daughter that I swore that when I got pregnant I was going to keep the baby’s sex a secret from everyone but its father. And then I had an actual daughter and not only shared the news of her girl-ness, but happily accepted hand-me-downs from anyone and everyone and ended up with this: 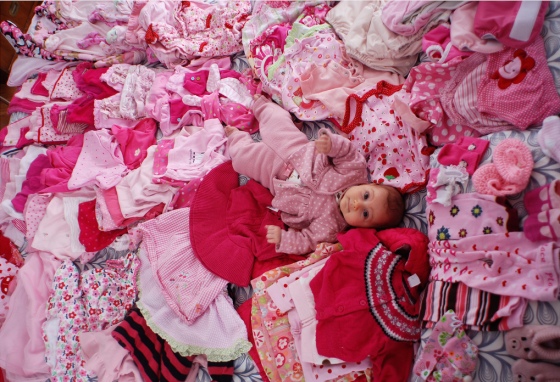 When you are parenting an infant (or just thinking about parenting an infant) you feel so much anxiety and excitement about shaping this little person and their whole outlook on the world that it’s easy for small things like what clothes they wear to take on looming importance. After all, an infant is basically just a lump for you to project all your hopes, dreams, gender politics, and neuroses onto. But as time passes and they grow into little people with their own ideas and desires and interests, it often turns out that our kids are not perfect reflectors of our carefully curated gender-neutral worldviews.

I was a disappointment to my own mother in this regard – as a toddler, I thoroughly ignored all the trucks and cars she kept buying me in her earnest 1970s way, and made a fast favorite of the Barbie knockoff that my babysitter, oblivious to my mom’s anti-Barbie leanings, gave me. My own daughter surprised me with her early penchant for baby dolls and shoes, though she is also passionate about monsters. It’s actually been really interesting raising a daughter who is the younger sister of a brother. His influence rounds out her interests more powerfully than I ever could. Thanks to him, at two she could identify at least two dozen dinosaur species, and by three she knew all the planets in our solar system.

Since my own childhood, we’ve made enough progress at gender equality that a lot of my beloved Free to Be You and Me now sounds strange and dated. And yet. Much has been said about the rapacious pinkification of American girlhood over the last couple of decades. And it’s not just about the ubiquitous pinkness of the “Girl” aisle in toy stores. (Which, why is that even a thing?? What could possibly be wrong with just having toys organized by type, not supposed gender of recipient?) It’s about the constant whittling away at little girls’ idea of what it means to be a girl, from dolls with unattainable body types, to hyper-gendered toy choices, to salacious children’s and doll’s clothing styles, to passive or self-sublimating female characters in countless books and movies.

Which is why it’s been so incredibly heartening to see Disney, the prolifigator of the Princess Industrial Complex famous for its conventionally beautiful, wimpy “heroines,” taking some of this criticism to heart and finally coming out with some truly admirable female protagonists. The two most recent Disney princess movies, Brave and Frozen, both feature wonderful, tough heroines who take their destinies into their own hands and have their richest, most rewarding relationships with other terrific female characters. And then I came across this little gem at our local library (picked out by my son, funnily enough): 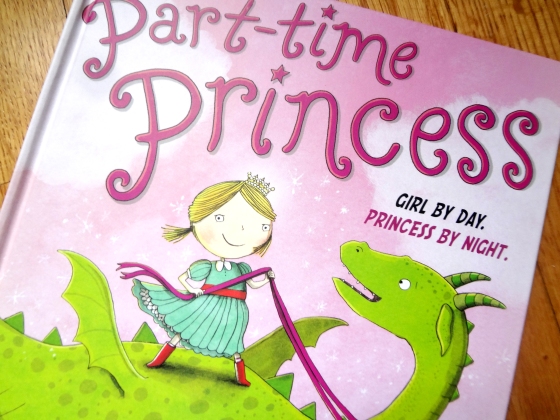 Published in 2013 by Disney’s children’s books imprint, Disney-Hyperion, this cute book by author Deborah Underwood, with pictures by Cambria Evans, tells the story of a little girl who leads an ordinary life by day but at night turns into a kickass princess, capable of not only rescuing herself, but everybody else too. 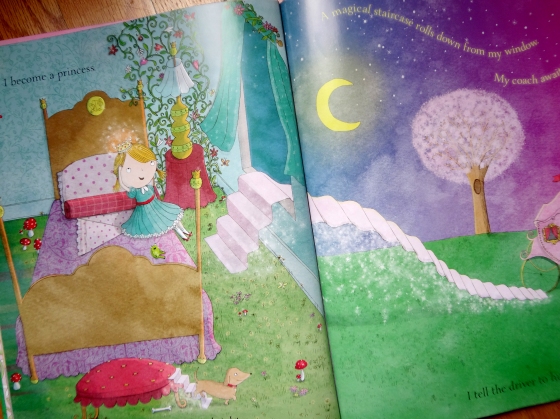 I loved that her royal duties include fire-fighting and dragon-taming, 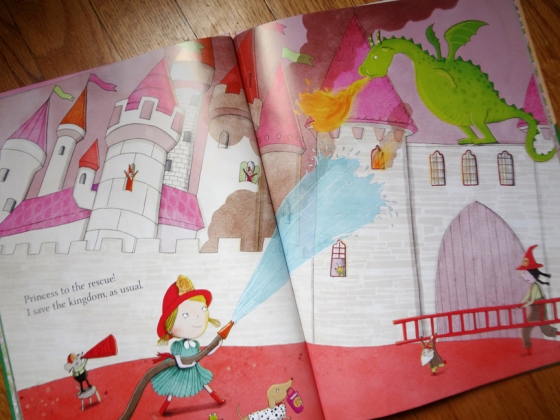 And my amphibian- and mud-loving children appreciated that she goes puddle-jumping with her mom, the queen. 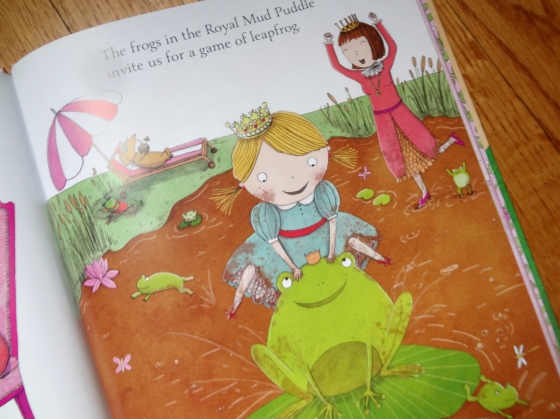 There is a royal ball, of course, and the princess quells drama by inviting the trolls to dance with her. There’s also a handsome prince there, but, you know, whatevs. 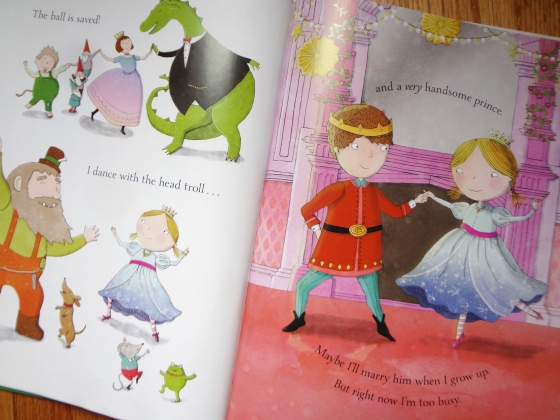 Also did I mention that she drives a monogrammed motorcycle? 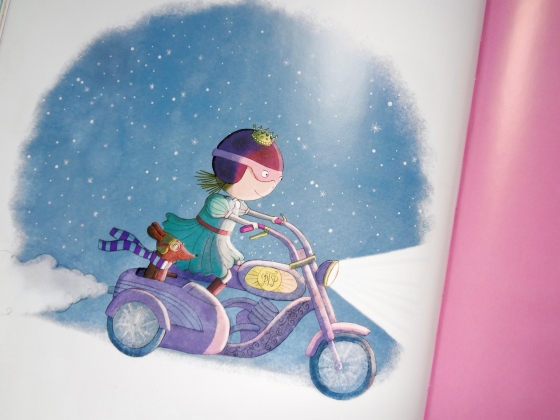 I love this messy, brave, and fun-loving little princess, and I also love that unlike many kids’ stories, her mother was not only present throughout the story, but a total ally in fun and adventure. Role models for the whole family. 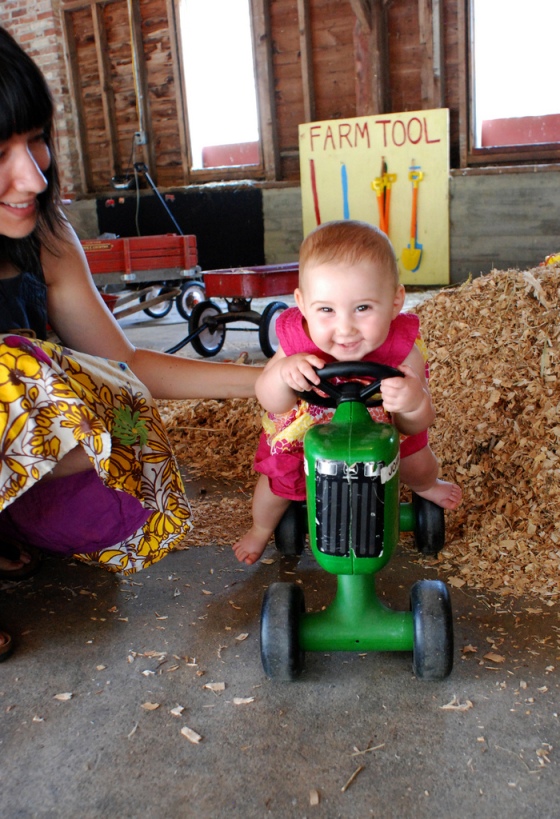 One thought on “part-time princess”