So, this blog post is mainly going to be about Jill Barklem’s beautiful Brambly Hedge stories, but first I have to tell you about this awesome stick fort we made.

We have this total mess of a tree/shrub thing at the back of our property. 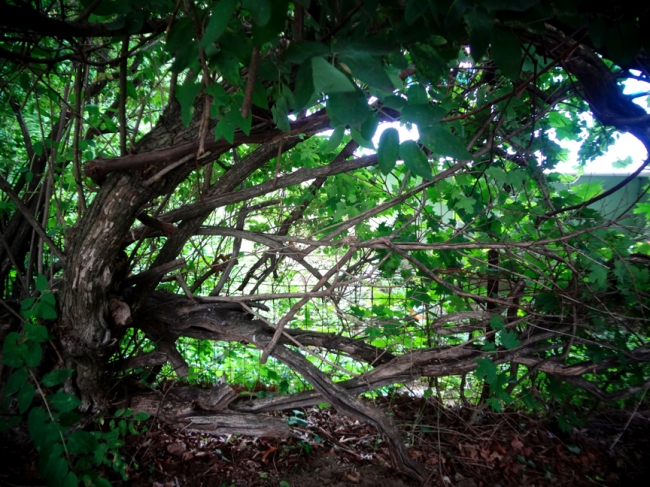 It’s so crazy and fugly looking that I just designated it the stick area and used it as a spot to pile unwanted sticks from around the yard and branches I pruned off our long-neglected lilac bushes, until they made their way into the fire pit. Its only real selling point is that it puts a little bit of privacy in between us and our neighbor’s swimming pool. UNTIL NOW. 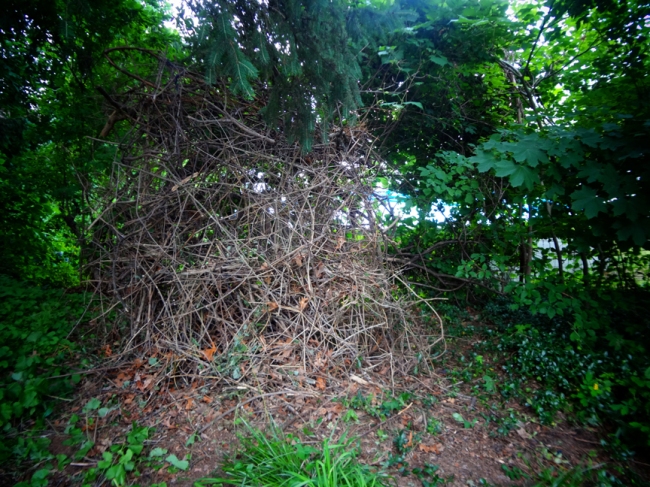 Now it looks like this! Pretty much just as much of an eyesore from the front, but now instead of just a big pile, our sticks are formed into an awesome fort to play in! 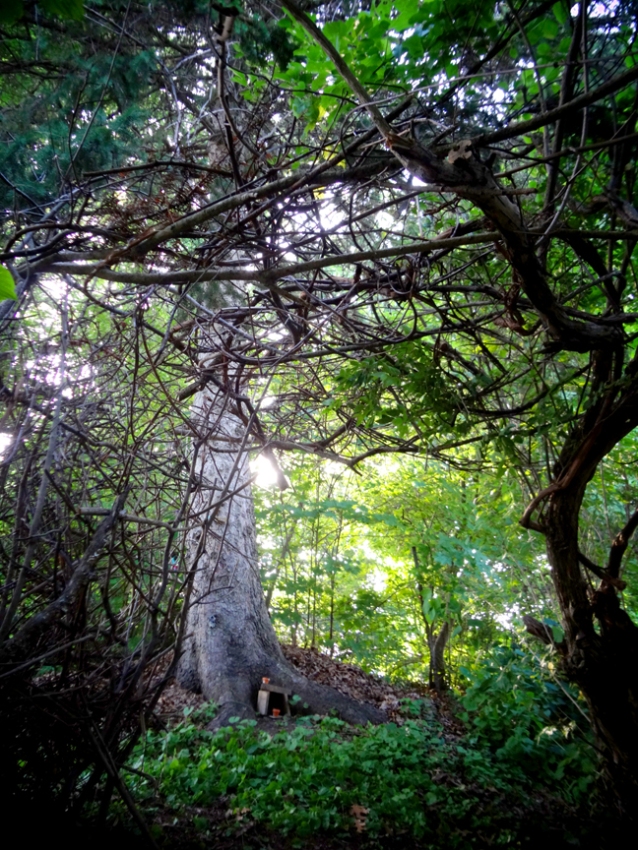 I basically just planted a bunch of dead branches in the ground, laid a stick across them like a beam, and then balanced branches and vines on top between the crazy tree thing and the beam. Then I wove some long sticks in between the ones I had planted into the ground, and at the end we just threw all the smaller sticks at it and let them sprinkle down wherever they stuck. 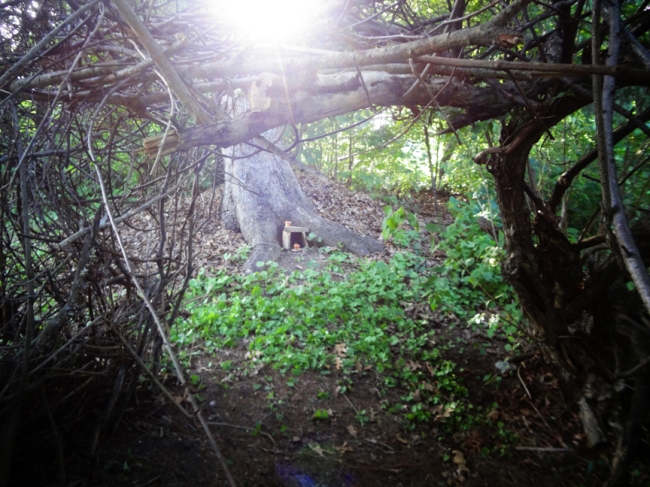 The kids were pretty enchanted. 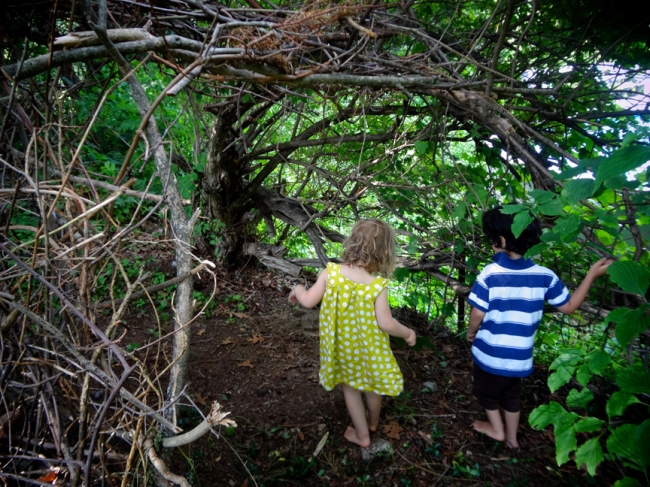 I was talking to a friend the other day about how one of the awesome things about parenting is that in some ways it’s like a second chance at childhood. Whatever you miss from or wished you had in your own youth, you now have the opportunity to do with your kids. I always wished I had a cool clubhouse or fort or treehouse when I was a kid. But we are not a handy family – between me and Jon, I’m the construction expert, and my expertise pretty much begins and ends with competence at assembling Ikea furniture. But as it turns out, I’m also good at making non-load-bearing things out of stuff I find in the yard! So here we are. Extensive modular furniture construction experience + large amount of branch refuse = awesome stick fort.

As a fort and treehouse craving kid, it’s probably for the best that I never discovered the Brambly Hedge books because I would have about died of jealousy over the amazing tree dwellings of these cute little mice. 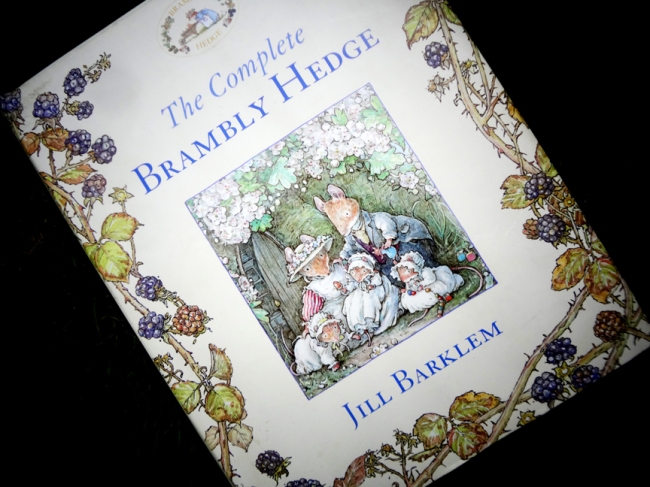 The eight Brambly Hedge stories are kind of Beatrix Potterish, with the sweet naturey illustrations and English countryside setting, but they also have tons of intricate cross-section drawings of the trees and other places where the Brambly Hedge mice live and work. 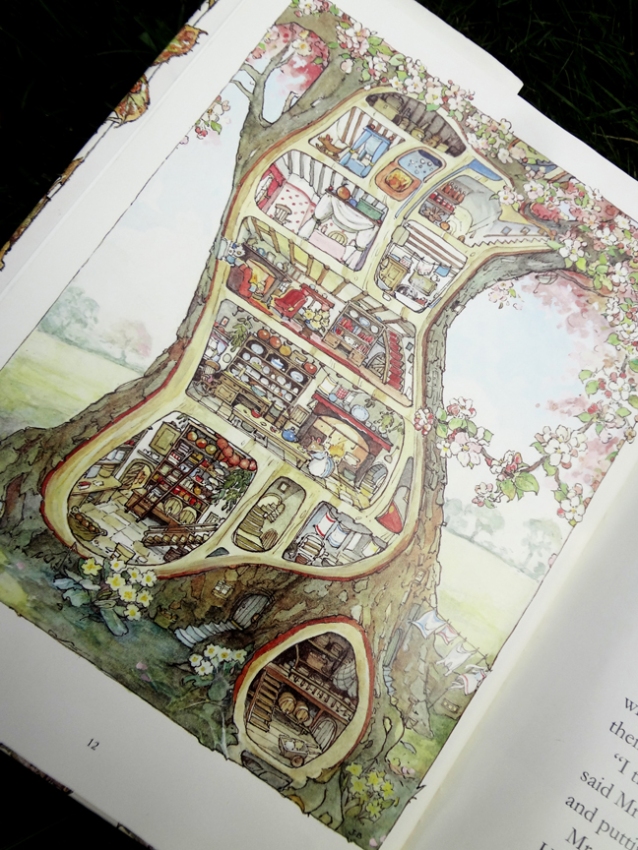 The Brambly Hedge mice have a Store Stump, where ingredients can be found to make such foodstuffs as watercress soup, dandelion salad, honey creams, syllabubs, and meringues, not to mention elderflower wine and blackberry juice. Of course, sometimes, they just want to chill on their stoop and eat a huge stack of toast with jelly, like Mr. Toadflax here. 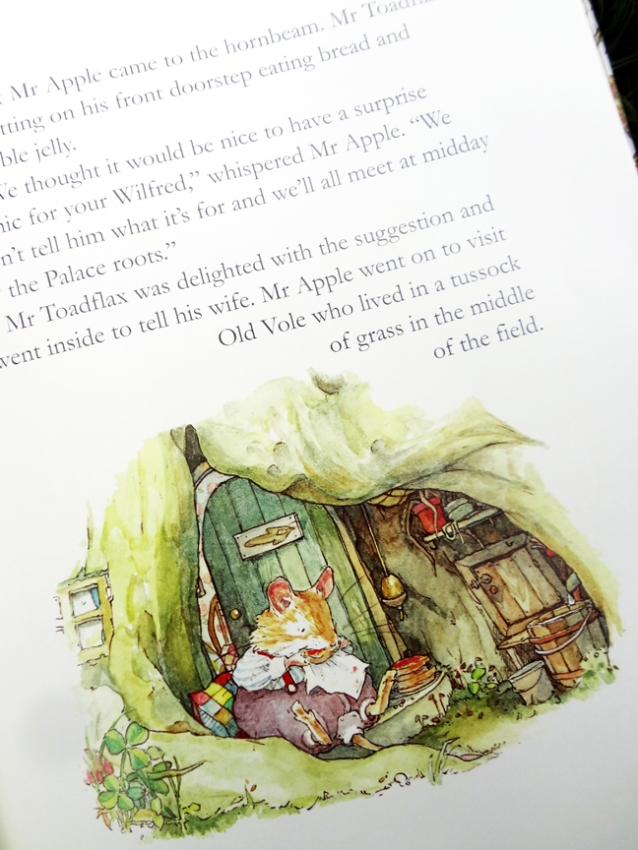 Even Brambly Hedge, however, is not immune from the English penchant for titles and class divisions. Most of the mice live in humble trees like the crabapple, but Lord and Lady Woodmouse live in the grand Old Oak Palace. 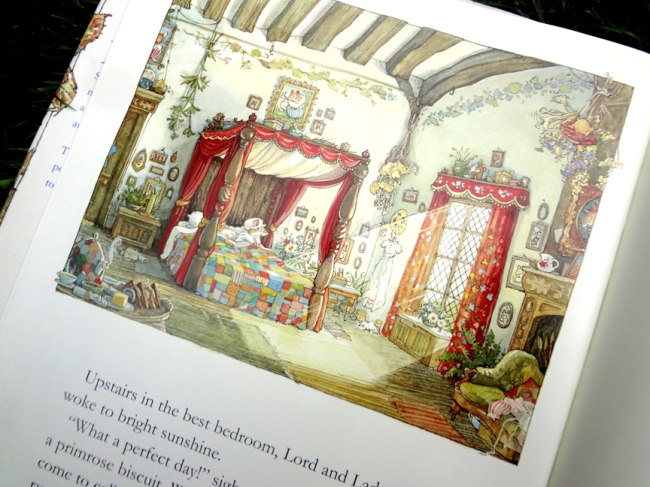 Their digs are rustic but posh, if that’s possible. By the way, did you know you can buy an English lordship for about $33? And of course there’s a plethora of the mills my kids are so wild about. Imagine this place filled with the conceptual art I told you about in that wish list post, and you’ll have a good idea of the Wassaic Project. 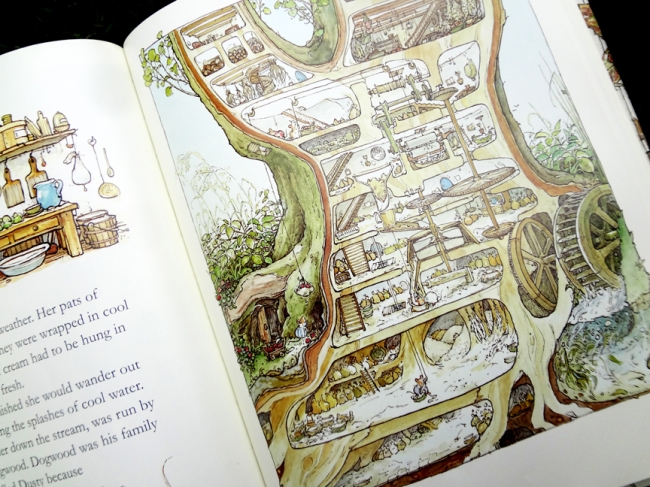 Intricate and adorable though it is, the flour mill turns out not to be an ideal place to raise a bunch of babies, as Poppy Eyebright finds out when she and Dusty, the miller, start a family. Getting up two flights of stairs with some groceries and one baby is an arduous enough task, as I learned in our Chicago days, so 92 stairs with triplets, not to mention the noise and dust of a mill, would probably put anyone over the edge. 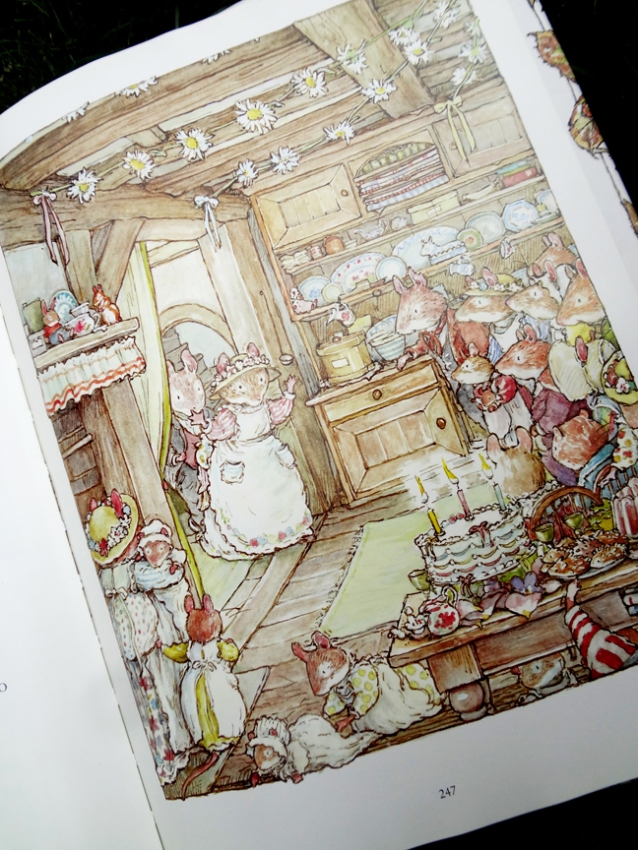 Fortunately the resourceful and generous Brambly Hedge community comes to her rescue and finds and refurbishes a new tree-cottage for Dusty and Poppy’s family to live in. They even arrange a sleepover for Poppy and the babies at Old Oak Palace, so Dusty and the gang can secretly move and unpack all their belongings and surprise Poppy. I first read this story when we were in the thick of a move ourselves, and how I wished I had a village of helpful mice to do it all for me!

The kids built this Brambly Hedge-esque structure at the foot of our pine tree with some wood scraps left over from a construction project, and the Calico Critters mouse family a friend gave my daughter for her birthday last winter are the perfect accessory. She made sure there were beds for the babies to sleep on 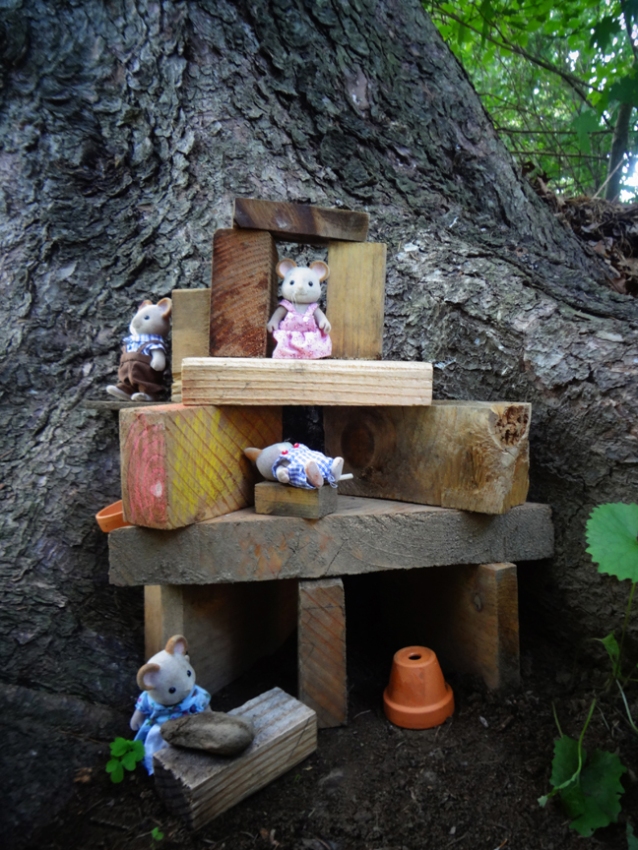 And my son made sure to provide mouse toilets. 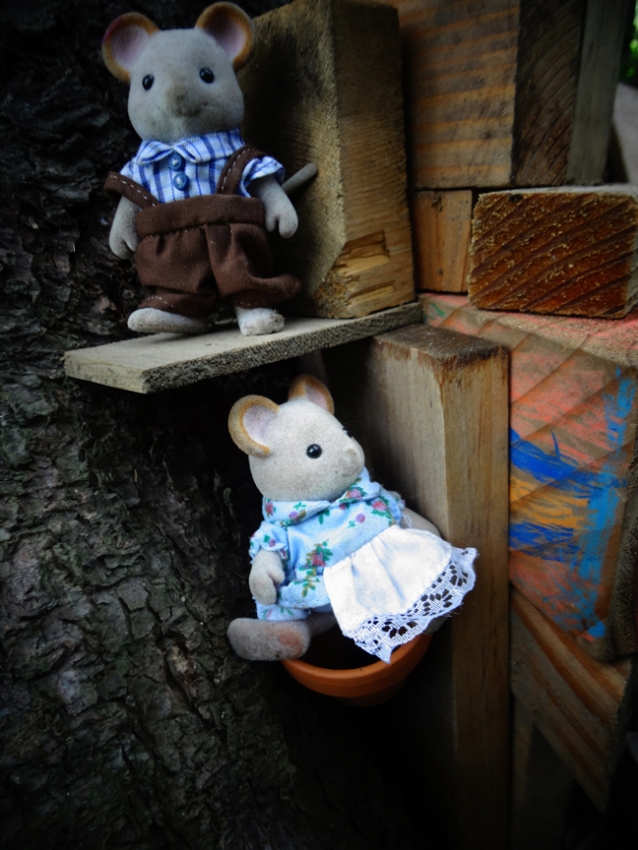 I can already tell this is going to provide weeks of backyard entertainment. 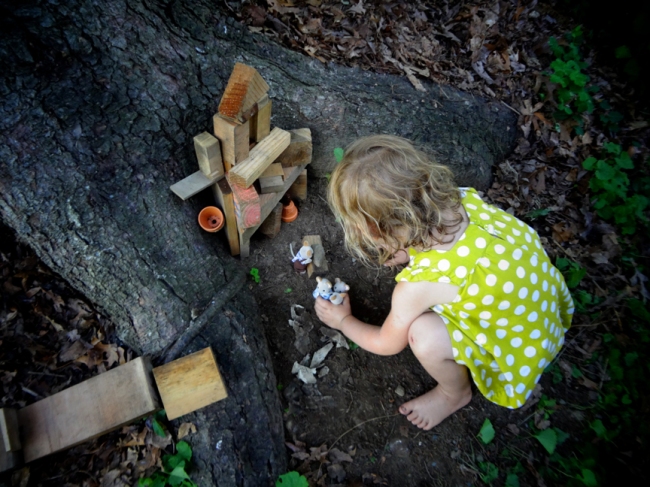 Maybe they’ll even be captivated enough to play on their own and I’ll be free to fulfill my ambition of summer novel reading, in my fort! 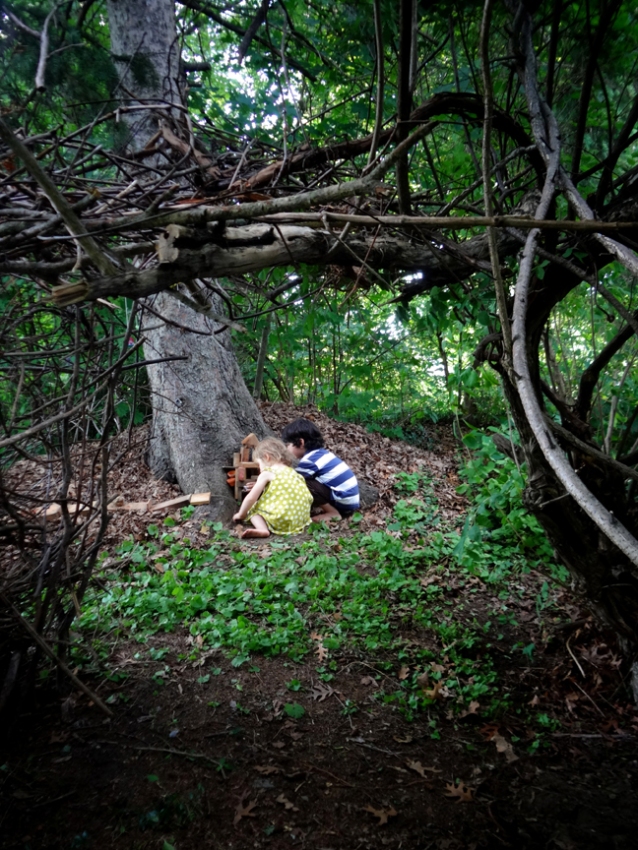